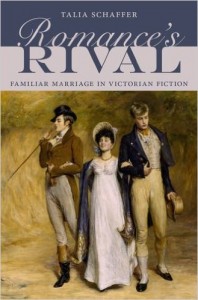 In Romance’s Rival, I argue that the most popular plot of the dominant genre of the nineteenth century – the marriage plot in the Victorian novel – actually functions differently than we had assumed. The marriage plot in fact works to problematize romantic marriage (the new, controversial practice of marrying a person for whom one felt passionate love) by setting it in competition with familiar marriage (the older model of marrying a trustworthy comrade). In weighing two suitors, female characters could essentially decide what kind of life, what kind of person, she wanted to be. Romantic marriage offered the chance to be a modern individual; familiar marriage, however, confirmed her enmeshment in relational values. Romance’s Rivals addresses the history of the novel from Clarissa through Howard’s End, focusing primarily on Austen, the Brontës, Trollope, Yonge, Craik, and Broughton. Covering hundreds of novels over centuries, Romance’s Rival aims to rethink the history of female subjectivity through the crucial mechanism of the marriage plot.

Lauren Hoffer, Studies in the Novel

This entry is licensed under a Creative Commons Attribution-NonCommercial-ShareAlike 4.0 International license.

Need help with the Commons? Visit our
help page Send us a message
Skip to toolbar