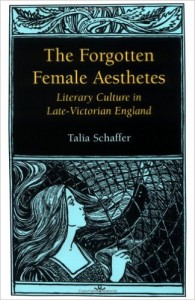 The Forgotten Female Aesthetes argues that women fundamentally shaped the aesthetic movement that Wilde and his friends popularized. From Ouida’s popular novels studded with epigrams, through the aesthetic fashion and interior design manuals of Mary Eliza Haweis and Rosamund Marriott Watson, to the experimental art of Lucas Malet’s groundbreaking fiction, women arguably invented the aesthetic movement – a debt that later writers struggled over acknowledging, obscuring, or denying. This book not only tries to restore these lost female writers of the late-Victorian generation but also speculates on how canons get formed and what it means to develop a different version of a literary genre.

Need help with the Commons? Visit our
help page Send us a message