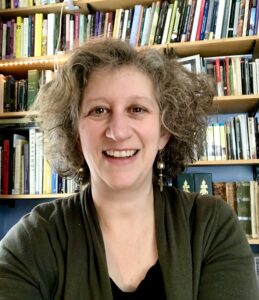 Talia Schaffer is a professor of English at Queens College CUNY and the Graduate Center CUNY.

My most recent book, Communities of Care: The Social Ethics of Victorian Fiction (Princeton UP, 2021), uses the feminist philosophy of ethics of care as a way of understanding Victorian social relations. I define care as ‘meeting another’s need’ and I explore its qualities of performativity, discursivity, and temporality. What happens, I ask, if we imagine our academic lives according to an ethics of care? How might we reimagine character, narrative, and citation in terms of care? My aim is to open up this theory for literary critical methodology, and to enable us to use a theory of care for reading both Victorian texts and our own lives.

I am currently working on two other book projects. One continues the work of Communities of Care by focusing on a model of character that is produced by repeated caregiving acts. Working as governess, nurse, servant, or companion, meant performing behavior and emotions in order to get paid, which means that figures from Rosa Dartle to Lucy Snowe to Mrs. General do not express an authentic self, but rather, a socially situationed, relational self shaped by emotional labor. I’m interested in developing a rubric for reading performative subjectivity instead of deep-interiority individuality in the nineteenth-century novel.

The other book is about feminism and the archive. Starting in the 1970s, Victorianist feminist criticism prioritized salvaging neglected works of women’s writing. I want to explore the aftereffects of that recovery agenda. How has it tacitly shaped the past 50 years of Victorianist feminist criticism, and what might be other ways of thinking about feminist work for the 21st century? To find paths not taken, I go back to a foundational work of 1897, Women Novelists of Queen Victoria’s Reign, and cast ahead to new forms of criticism commensurate to an era of digitized archives and trans identity. I have chapters on Corelli, Malet, Woods, and Yonge – figures who pose interesting cases for recovery.

My previous book is Romance’s Rival: Familiar Marriage in Victorian Fiction (Oxford University Press, 2016), which won the NAVSA Best Book Prize for 2016 and was chosen as one of Choice‘s Outstanding Academic Books of 2016. Romance’s Rival argues that the marriage plot worked through anxieties about the emergence of romantic marriage by putting a ‘familiar’ suitor (a trusted neighbor, cousin, etc) into competition with a ‘romantic’ suitor (a dashing but perhaps untrustworthy stranger). In deciding whom to marry, the woman was also deciding whether to pursue a life of personal pleasure or continued enmeshment in her existing social networks, whether to announce herself a liberal agent or a relational being. The marital decision was, therefore, a larger decision about the woman’s own identity. Romance’s Rival explores the development of female subjectivity from the seventeenth through the twentieth century and rewrites the history of the novel, prioritizing female agency and preferences. It looks at several varieties of familiar marriage: marrying a neighbor, a cousin, a disabled man, and a colleague, and it asks why women might genuinely have preferred such unions to marriages based on romantic pleasure.

Need help with the Commons? Visit our
help page Send us a message